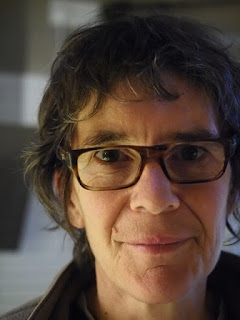 Sheila Herring’s work is visceral and impassioned, combining a kind of abstract expressionism with subtle and robust functional shapes.

Exploring expressive techniques of working with the clay is a vital aspect of Sheila’s pot making. She seeks out and employs processes that have elements of the unpredictable, irregular and enlivened about them. The surface decoration emphasises the freedom of the clay work, often involving the movement of various thicknesses of slips over the clay, traces of the application processes revealed. Slips also build up defining lines, as can the glazes used.

Free pencil line drawings and gestural sgraffito marks are informed from Sheila’s spontaneous drawings. Sometimes there are suggestions of flowers, at others the repetition of freely drawn patterns. Her functional pots are made from black earthenware clay.

1982  to 1987 Evening and day classes in London including class tutored by Ian Godfrey at Montem Pottery Hornsey.

1990/92 Monkton Wyld, Dorset. Jointly tutored Raku weekend workshops. Constructed a wood fired Raku kiln using it for the courses. Also facilitated sawdust firings and made functional ware for use in the community kitchen.

1994 Awarded a grant from South West Arts and Elmhurst Trust to study with basket maker Joe Hogan in Ireland.

2005 to 2009 Self employed construction worker specialising in ecological building (followed on from our own self build timber and straw bale house).

2012 Started working independently as a self employed potter.
Email ThisBlogThis!Share to TwitterShare to FacebookShare to Pinterest 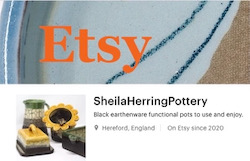